The GEF-funded “Mano River Ecosystem Conservation and International Water Resources
Management (IWRM) Project” is being implemented by the International Union for Conservation of Nature
(IUCN). It targets the conservation and sustainable use of the transboundary water basins and their
biodiversity resources within the Mano River Union member states. These resources are of highest
importance for the sub-region, seriously affected by socio-political problems with displaced and
suffering populations, and demand support under these very difficult contexts. The project seeks to
promote holistic approaches to integrated ecosystem management and to design participatory and
community–based strategies, which will lead to in-situ conservation and sustainable use of soil, water
and biota in the river basins and on their watersheds.

The project is being implemented in the Upper Guinea forest covering Sierra Leone, Guinea, Liberia and
Cote d’Ivoire with the objective of strengthening the management of transboundary natural resources
for sustained ecological benefits and improved livelihoods for the forest adjacent communities.

The four countries share 10 transboundary river basins (see Figure 1, Map of the transboundary watersheds and protected areas within the area covered by the four Member States of the Mano River Union). In addition to being very narrow-shaped and small-sized (22,000 km² and 320 km-long on average), flowing from North-East to South-West, these coastal basins appear to have similar profiles. They consist in biodiversity key areas with conservation stakes in their upstream catchments and large protected areas covering the outlet areas. They face water quality and water quantity issues, during low flows for the latter, in their downstream catchments, where mining operations and agro-industrial plantations are involved (MRU, 2011).

The four countries of the MRU also share the last remnants of a unique biodiversity hotspot area, the formerly contiguous Upper Guinea Forest, whose area and biodiversity are constantly decreasing because of the fast development of agroindustrial plantations and the uncontrolled expansion of both slash and burn and mining activities, combined with poaching (CEPF, 2015).

These relicts of the Upper Guinean Forest ecosystem are now confined to only some transboundary protected area complexes whose conservation will be addressed by this upcoming GEF project and which are considered as the future project intervention sites.

However, until today, shifting agriculture, mining and poaching activities are advancing steadily into the remaining forest areas along formerly constructed logging roads. The current and the proposed National Parks, in completion with their buffer zones and corridors, correspond to the only remaining core areas giving the opportunity to launch an integrated forest ecosystem management in the whole area covered by the MRU (see Figure 1) (GRASP/UNEP, 2009).

MRU Countries have largely weak economies. Despite the wealth of natural resources in the Mano River Union sub-region, high levels of poverty persist in the member countries. The region is one of the poorest in Africa, with average annual income estimated at US$ 460. All four countries suffer from poverty, civil conflicts, rapid urbanization (resulting in forest clearance), balance of payments difficulties, over-reliance on primary products for export earnings and over-dependence on bi-lateral and multi-lateral loans. The countries are at different stages of both political and economic development, however. Individual economic indicators show some variation, ranging from those with a per capita gross national income (GNI) of over $ 700 per annum (Sierra Leone, Côte d’Ivoire) to those with less than $ 500 per capita (Guinea, Liberia) (World Bank statistics, 2014), and a debt burden ranging from 14-55% of GNI (World Bank statistics, 2013). Similarly, national institutions reflect variations in strength and infrastructure, while there is considerable diversity in the functioning of political systems.

The economic problems of the region are further exacerbated by the high population growth rate. Currently MRU area supports a population of about 41,800,000, predominantly living in fishing, farming or forest communities. At the present average population growth rate of about 2.5% per annum, this figure is projected to rise to about 53,500,000 by the year 2025. As this population embarks on development for economic survival a lot of pressure is put on land and forest resources (UNHCR, 2012).

All four countries have experienced internal conflicts and, or, instability for varying periods over the last 25 years. However, they now enjoy relative peace after holding elections in the recent past (MRU, 2013). Their economic, political and social systems were significantly eroded during the periods of unrest and are still considered fragile despite the recent peaceful period. All four countries possess significant natural resources below and above the ground including marine resources in the form of fishery resources and the possibility for oil and gas as well. The exploitation of these resources and the distribution of the gains and costs have contributed to insecurity and inequality that in turn raised tensions and led to instability and human rights violations including sexual and gender based violence. In all four MRU Member States there have been tensions along the borders especially during and immediately after internal conflict. However there is no history of unresolved border claims or of sustained military confrontation. The region has so far avoided inter-country conflict. Nevertheless all four have experienced long periods of insecurity, instability and eventually internal conflict (IISD, 2011). For this reason the present project responds to the target of promoting regional public goods and will contribute significantly to the ECOWAS and African Union’s objectives of regional integration particularly in West Africa.

Three of the countries in the Mano River Union – Guinea, Liberia and Sierra Leone – are slowly recovering from the worst Ebola outbreak since the disease was identified. The socio-economic impact of the outbreak in the region was significant, the growth rate of the three countries dropping from 4.5% to 0.4%, from 5.9% to 0.7% and 11.3% to 6% respectively.

Observed changes in the regional climate in recent decades have resulted in decreased precipitation. Overuse and misuse of land resources, related to agriculture expansion and forest elimination, have resulted in decreased run-off and degraded water quality (SL-MTA, 2008). This degradation is particularly crucial for the natural habitats around the outlets of the water catchment areas, where local population is exposed more and more frequently to bush fire, seasonal unavailability of drinkable water, freshwater resources and inland fisheries (STEWARD, 2013; OGUIDAP/OIPR/FDA-EPA, 2011). More downstream, the region’s water resources, which serve as the transboundary link between countries, are increasingly being overcommitted for agriculture, animal husbandry and hydroelectric power generation, even as these resources are dwindling. This is leading to conflict situations (MRU, 2013; Liberia, 2015).

Regarding future climate changes, regionally downscaled projections of temperature changes in West Africa show a clear pattern of overall warming in both mean and maximum temperatures, and a trend of increasing change from coastal to interior regions (CEPF, 2015). Analyses of trends in these projections show that, on average, mean annual temperatures are projected to increase by 1.9°C by 2055 (from 25.6°C to 27.5°C), and approximately 35% of the Upper Guinean Forest area has a projected mean annual temperature increase of greater than 2°C. Intra-annual variability in monthly mean temperatures is predicted to remain relatively constant (1.5°C). Mean maximum monthly temperatures are expected to rise by a similar amount on average by 2055 (30.5°C to 32.3°C) (CEPF, 2015). Projections of changes to precipitation regimes in West Africa are uncertain and the differences in projections between different models are high (CEPF, 2015; Christensen et al. 2013). This is due, in particular, to the complex nature of the West African monsoon system. Overall, most Africa-wide and regional projections broadly suggest an increase in rainfall in the region, and a possible small delay in the development of the West African rainy season (low confidence). Should the latter occur, its impact would be considerable, given the key role rainy season onset plays in triggering vegetation changes and local atmospheric heat and moisture cycle feedbacks (CEPF, 2015; Christensen et al. 2013)

The human population in the target region is dependent on these forest resources for a variety of timber and non-timber forest products. Profit driven industrial timber extraction and extractive mining interests are harvesting substantial renewable and non-renewable natural resources and often disregard sustainability of resource use. The conservation of this biodiversity is therefore critical to the sustainable management of forest resources given the increasing demands (Liberia, 2006). The remaining forest is highly fragmented, restricting habitats to isolated patches, and threatening the ecosystem’s unique species of flora and fauna. Restoration of a significant part of the forest area will present a potential for carbon sequestration with monetary value that can be given to environmental benefits coming from activities aimed at reducing carbon emissions (Winrock international, 2014). Opportunities for pilot projects under REDD will be evaluated and piloted where feasible.

Fortunately, all four MRU countries are now enjoying relative peace and are focusing on consolidating the peace and promoting sustainable development. Accordingly, these four countries recognize the imperative role of their water resources and forest ecosystems in sustainable development and are highly interested in integrated water and forest resources management approaches that are sensitive to the livelihoods needs of their populations (STEWARD, 2010).

Consequently, the countries are devoted to invest in interventions that will promote integrated water resources management and ecosystems conservation as well as the sharing of benefits from their direct and indirect use. The MRU countries anticipate benefits from REDD+ as an additional incentive for preserving and better managing these resources (RSPB, 2014). 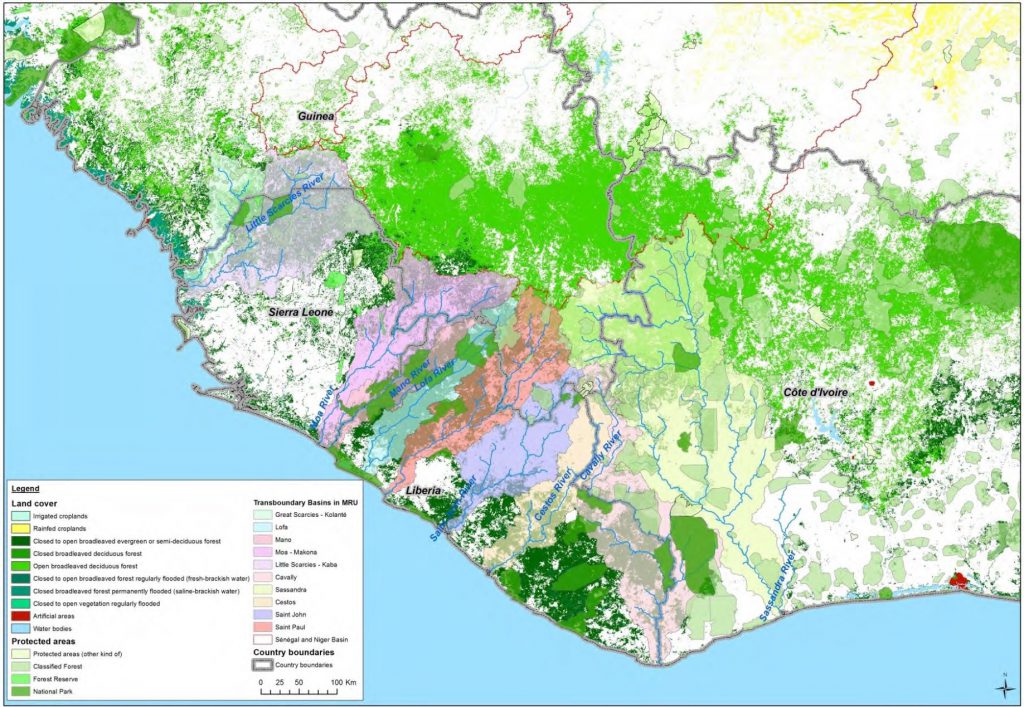